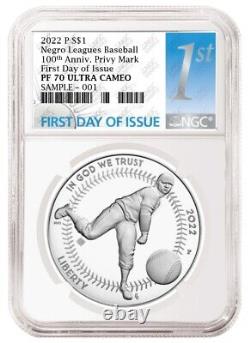 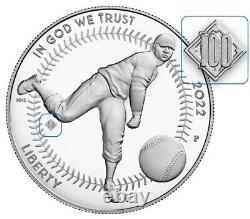 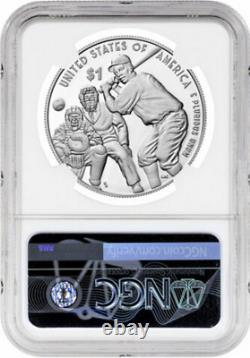 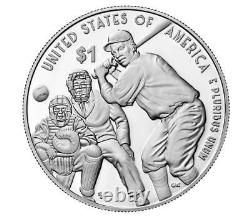 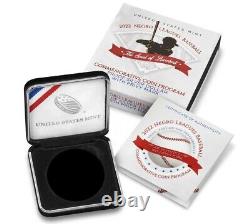 NGC PF70 Ultra Cameo, First Day of Issue with the NGC Blue First Day Label. In addition to the coin, you will also receive. US Mint Box with outer sleeve. These are rare as there are only 20,000 of these coins with the 100th Anniversary Privy Mark.

The Negro Leagues Baseball Commemorative Coins are being minted in honor of the 100th anniversary of the establishment of the Negro National League, a professional baseball league formed in response to African-American players being banned from the major leagues. The design of these coins per Public Law 116-209 states that the coins shall be emblematic of the Negro Leagues Baseball Museum and its mission to promote tolerance, diversity, and inclusion. Obverse: A depiction of a pitcher in mid-throw with the baseball in the foreground and baseball stitching as a border. Inscriptions are "IN GOD WE TRUST, " "2022, " and LIBERTY. A special privy mark is included on the left side of the coin's obverse underneath the pitcher's raised right knee.

Reverse: Depicts a player's eye view of a pitch being delivered to the catcher at the plate. This is a pre-sale listing as the coins still need to be graded by NGC. The photos for this listing are file photos. The coin you receive will be similar to what is shown in the photo, but will have unique NGC certification number. This item is in the category "Coins & Paper Money\Coins: US\Commemorative\Modern Silver/Clad (1982-Now)".