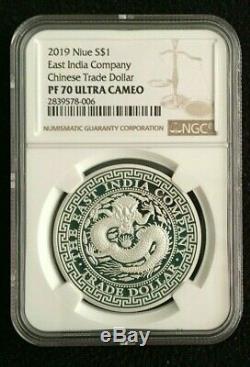 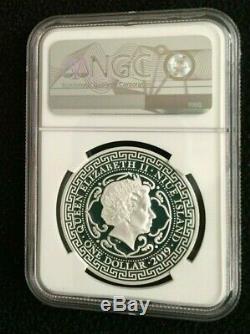 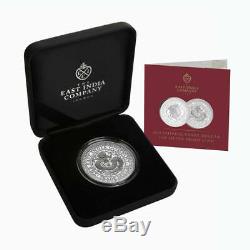 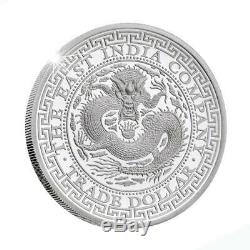 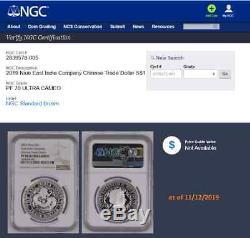 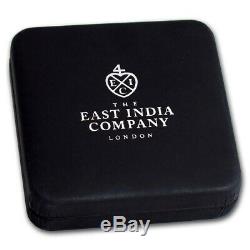 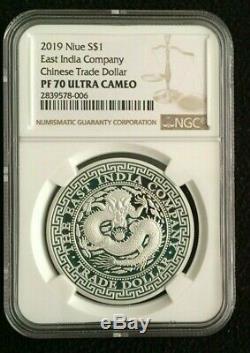 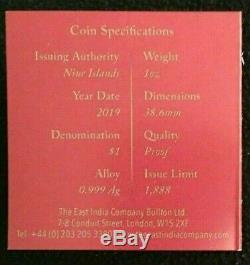 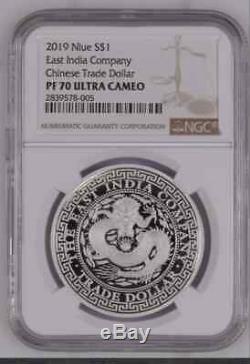 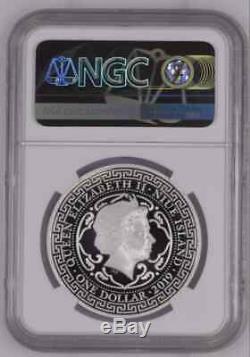 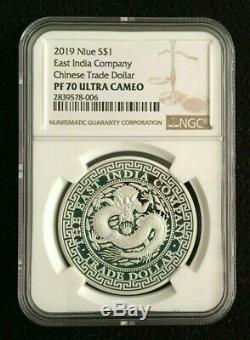 This coin is beautiful - stunning design - only 1,888 made worldwide. 3rd coin issued in a 5-coin series U. NGC'Top Pop' designation - as of 11/13/2019 NGC hasn't published the total number of coins that are certified NGC PF70UC worldwide (see pictures). Should be a very low number - I will try to update when that number becomes available from NGC.

Great'sleeper' coin for collectors. Obverse: Design a mythical dragon in traditional Chinese style which is based on a new Silver Chinese coin minted in 1889. The dragon is surrounded by the inscriptions "THE EAST INDIA COMPANY" and "TRADE DOLLAR". The perimeter of the coin has a traditional Chinese scroll-pattern. Reverse: Depicts the right-facing profile of Her Majesty Queen Elizabeth II, the year of issue and the face value. A Chinese scroll-pattern is also featured around the perimeter. Received back from NGC on 11/12/2019. Max mintage is 1,888 coins worldwide for this PROOF edition. NGC Serial Number : 2839578 -005 thru -008. Coin, OGP, COA & NGC Coin Holder in Perfect condition. Includes'The East India Company - London' Full original Packaging & Certificate of Authenticity. Information below courtesy of APMEX and The East India Trading Company web sites. This proof Silver coin is inspired by a Silver Chinese coin that was minted in 1889, following the reorganization of Chinese weights and measures. This beautiful proof coin has a limited mintage of 1,888 coins.

Mintage of 1,888 coins. Comes in a box with a certificate of authenticity. This Silver Proof restrike is a historical coin with an amazing design. It became necessary to produce a special dollar for trading in the British Colony when the price of Silver rose rapidly in value between 1875 and 1895. The Silver price disturbed trading and resulted in a very serious shortage of minted dollars.

To overcome the threat of a currency famine, The Royal Prerogative of the English sovereign gave approval in 1894 for the minting of a special British Dollar for general use in Far Eastern Trade. The legendary Empress Dowager Cixi had a quest to modernize China's economy and the new Silver Chinese coin of 1889 was struck following the reorganization of Chinese weights and measures. The need for the trade dollar was the surge in western merchants looking to trade with China following the opening of Opium Wars.

THE THIRD ISSUE IN THE TRADE DOLLAR COIN SERIES. STRICTLY LIMITED TO ONLY 1888 COINS WORLDWIDE.

MOST LIMITED SILVER PROOF COIN IN THE TRADE DOLLAR COLLECTION. The East India Company is pleased to announce the release of the third coin in this uniquely popular series. Struck in exceptional proof quality, the reverse side of the silver one ounce pieces features a detailed depiction of the classic Chinese dragon in the centre, surrounded by the text: THE EAST INDIA COMPANY, the denomination and a traditional oriental patterned border.

Engraved with a uniquely patterned obverse which includes an elegant effigy of HM Queen Elizabeth II created by British sculptor Ian Rank-Broadley, the 2019-dated Chinese Trade Dollar 1oz silver proof coins have a limited mintage of just 1888 presentation pieces and are the first coins in the collection struck with this year date. A lasting tribute to a currency born out of commerce and trade, The East India Companys 2019 Chinese Trade Dollar is part of a five-coin series and is certain to stand out as one of the collections most admired pieces. Product Issue Limit 1888 coins.

The ferocious depiction of a mythical dragon in traditional Chinese style appeared on a new silver Chinese coin in 1889, following the reorganisation of Chinese weights and measures sanctioned by the legendary Empress Dowager Cixi one of the last empresses of Chinas Qing Dynasty in her quest to modernise Chinas economy. Arising from the surge in western merchants looking to trade with China following the opening of Opium Wars, the Chinese Trade Dollar was minted in the same specification as the trusted and preferred Spanish 8 Reales and became commonly known as silver dragons or dragon dollars.