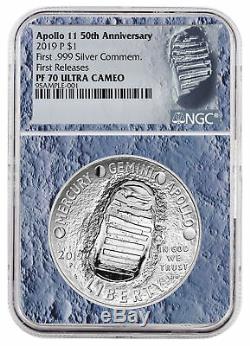 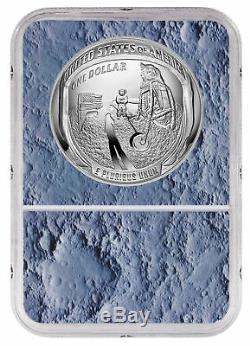 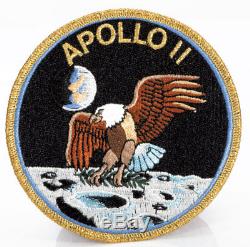 2019 Apollo 11 50th Anniversary Commemorative Silver Dollar Proof Coin NGC PF70 FR Moon Core Holder SKU56542. Why order this 50th Anniversary Commemorative 2019 Apollo 11 Silver Dollar Proof? Share in the fiftieth anniversary celebration of one of the seminal accomplishments in human and American history, the first landing on the moon. The event not only had scientific significance, but it also marked a major victory for the United States in the Cold War space race with the Soviet Union.

This coin, which is one of seven issued to mark the occasion, was struck at the Philadelphia Mint on a 26.73 g planchet of. It is part of a mintage of 400,000 pieces across all silver options being offered by the mint. Gary Cooper won a design contest for the obverse. At the center is a footprint on the surface of the moon. Arching over the footprint are the words "MERCURY, " "GEMINI, " and "APOLLO, " which are interspersed with images of the moon in four different stages.

The names represent the programs that led up to the historic mission. "LIBERTY, " "2019, " and "IN GOD WE TRUST" are also inscribed on this face. The reverse replicates a famous photo of Buzz Aldrin's helmet that was taken while he and Armstrong were on the moon. The image shown in the visor, which is convex to replicate the curvature of the helmet, shows Neil Armstrong standing between the American flag and the lunar module.

"ONE DOLLAR" is inscribed at the top of the visor, while "UNITED STATES OF AMERICA" and "E PRURIBUS UNUM" (From many, one) are inscribed on the helmet above and below the visor, respectively. Perfect PF70 FR with Moon Core Holder. Numismatic Guaranty Corporation (NGC), one of the world's leading grading services, awarded this coin its highest grade, Proof 70. Only coins that are flawless as seen under 5x magnification receive that grade. NGC also indicated that the coin was received for grading within 30 days of its initial release by labeling it First Releases.

We cannot make any price adjustments after the sale is complete. Product Photo Policy: MCM attempts to display product images shown on the site as accurately as possible. We take all of our photos in house and due to reflections on the mirrored or proof surfaces of a coin there may appear to be'black' when there is not. If a coin has a color on it at all it will be described as'colorized' in the description or title. Due to the large inventory we sell, we use stock photos.

Serial numbers will vary from the image shown unless specifically stated in the product listing that the item pictured is the item you will receive. INTERNATIONAL ORDERS POLICY: We are accepting international orders from select countries. These charges are the customer's responsibility. However, we cannot guarantee this due to the volume of orders we process each day.