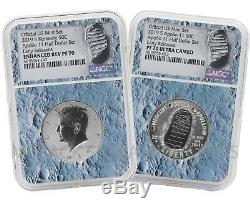 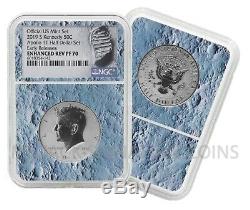 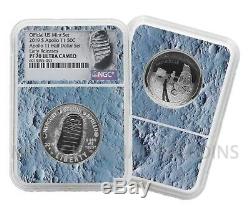 Apollo 11 50th Anniversary Half Dollar Set. Commemorative Coin Program to celebrate the first manned Moon landing on July 20, 1969, and the efforts of the United States space program leading up to this historic event. All coins share common designs and are curved. The set includes one Apollo 11 50th Anniversary Proof Half Dollar and one. Kennedy Enhanced Reverse Proof Half Dollar to commemorate the enduring relationship between President Kennedy and the American space program.

This product is limited to 100,000 units. Obverse: This design features the inscriptions MERCURY, GEMINI, and APOLLO, separated by phases of the Moon, and a footprint on the lunar surface, which together represent the efforts of the United States space program leading up to the first manned Moon landing. Additional inscriptions include 2019, IN GOD WE TRUST, and LIBERTY. Reverse: This design features a representation of a close-up of the famous Buzz Aldrin on the Moon photograph taken July 20, 1969, that shows just the visor and part of the helmet of astronaut Buzz Aldrin.

The reflection in Buzz Aldrins helmet includes astronaut Neil Armstrong, the United States flag, and the lunar lander. Inscriptions include UNITED STATES OF AMERICA, HALF DOLLAR, and E PLURIBUS UNUM. Only enhanced reverse proof Kennedy ever produced by the US Mint. With a mintage of only 100,000 it is one of the rarest of all the Kennedy half dollars made by the US Mint.

This set is graded perfect 70 by NGC. It is also in the exclusive moon core.