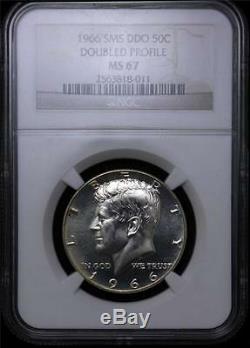 359 Graded by NGC in any grade. After president John F Kennedys death on November 22, 1963 plans went into motion 4 days later to put his portrait onto the half dollar as a memorial. The same design for the portrait was used from his inaugural medal. Gilroy Robbins engraved the obverse and Frank Gasparro designed the reverse of the coin's presidential seal.

The design of Kennedy's portrait and presidential seal has not changed in 50 years and only the 1976 Bicentennial issue has a different reverse of independence hall. This example features spot-free haze free fields and device with light obverse cameo contrast on the obverse and cameo contrast on the reverse. There is light toning in the bottom left quadrants and seen in the pictures. The examples with low population numbers are mostly tucked away in the top 50 registry sets that are already assembled.

After 1977 examples all need to be certified a perfect 70 (with the exception of the 1988) making the first years and varieties key to one day becoming number one. This coin is from the #2 ranked Kennedy half dollar variety set. Take a close look at the pictures provided because it is of the exact coin you will receive. Thank you for viewing my listing!