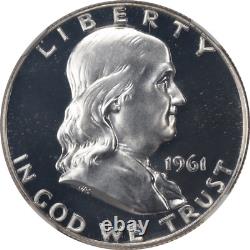 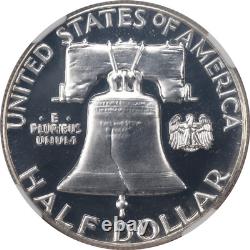 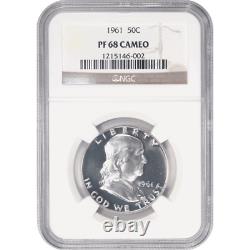 PR 68 CAM Nice Coin. This is a NCG Graded Coin. You will receive the pictured coin. A nice white coin with no issues.

In 1947, under orders from Mint Director Nellie Tayloe Ross, Mint engraver John Sinnock began work on designing a new half dollar using the likeness of Benjamin Franklin. Sinnock called upon his previous works as a template. In 1926, Sinnock created the commemorative half for the nation's sesquicentennial celebration.

The reverse of this coin featured a Liberty bell and this served as inspiration for the new half dollar reverse. The obverse portrait was taken from a 1932 bronze medal. Sinnock had created the medal's portrait using 18. Century drawings done of Franklin by French sculptor Jean-Antoine Houdon. The half was produced for sixteen years until the untimely death of John F.

Kennedy spawned the memorial redesign of the half to feature the likeness of the assassinated president. This item is in the category "Coins & Paper Money\Coins: US\Half Dollars\Franklin (1948-63)". The seller is "uscoinsandjewelry1" and is located in this country: US. This item can be shipped to United States.